Tomorrow Ross and I join up with other Linné members and head to Portugal for a 8 day training camp. We've never been to Portugal before, so I'm excited to visit a new country and experience new terrain. I've been taking these last few days super easy, as last week was a hard week for me and I don't want to be tired going into the training camp.

It feels a bit wrong to leave Uppsala, now that it feels like spring is on the way. The last few days have been the sunniest and warmest since last fall. It's currently 10°C (50F), according to the bedroom window thermometer! Of course, these are the days when I decide that I need to cut back on my training! I couldn't stay cooped up inside yesterday, though, so I went on a walk in the Nåsten Plains. The ice is still there, especially on the trails, but it's melting fast. What will Uppsala look like when we return? 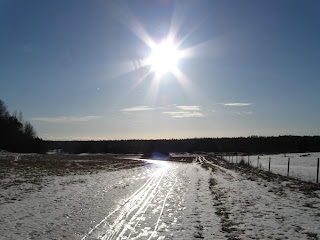 Posted by Samantha at 2:49 PM No comments:

Saturday evening, after we were all worn out from a mass start race in the morning and intervals in the afternoon, a group of us gathered in the clubhouse for food and games. I was all ready for a relaxing evening, but Johan had a surprise for us - indoor orienteering sprint around the clubhouse! A few of us decided that relay style would be more fun than individual teams, so we divided everyone into three teams. This was way more fun and also led to fewer collisions.

The team members who had not run yet had to hide in the kitchen, so that they couldn't watch where previous runners went (the course was the same for everyone). Those who finished got to hang out and be the peanut gallery as others were running, offering helpful and confusing tips to those running. The map Johan made was great, and we even got control descriptions that told us whether the small piece of numbered tape we were looking for was high or low.

I followed Ross around his leg with his camera and made a video that I posted on the Linné Project Meteorite website. My video is here and Johan's video is here.

Last Friday I woke up to blue skies and plenty of sunshine. Ok, when I woke up the sun had yet to rise above the surrounding apartment buildings, but I could tell it was on the way. It snowed here on Tuesday night (while we were out training) and again last Thursday (also, while we were out training), so I felt that there was finally enough snow to actually ski on. Also, they set classic tracks all through the fields and on a bunch of trails.

It was a beautiful ski. Not nearly as awe-inspiring as Orsa, but so much warmer. Also, it has the added benefit of being right outside my apartment. I walked for about 200m to get to the start of the tracks. I overdressed for the Nåsten Plains, expecting them to be cold and windy as usual. Instead, the bright sunshine warmed everything up.

I headed south on the fields and then took a trail up into the woods, I believe it's the trail to Hammarskog. The woods were thankfully cooler and much more fun to ski in than the Plains. Still tracked, but now only one track. I met some other people out there, but it was certainly not crowded. Most people were like me - skiing along at a very recreational pace, although I saw a few faster people. At the junction I turned back toward home and skied up to Hågaby parking lot and back home from there. Too bad there isn't more snow so I could so this more often! Or else I need a pair of rock skis so that I don't feel bad if they grate along the bottom.

Last weekend we joined OK Linné on their annual ski weekend in Orsa. As I mentioned, the forecast was for -24°C and I so I packed all the warm clothing that I owned. We lucked out, a bit, as it never went much below -20.

We stayed in an apartment with 9 other of our Linné friends, and all the other apartments were very close, so we had people stopping by quite often. I much prefer skate skiing to classic, so I was excited to head out on Friday morning on my skate skis. Unfortunately, Ross forgot his older skate skis so he classic skied the whole weekend. We set out together, but my skate speed in faster than his classic speed and it was hard to stay together. It was fun to ski around though and join up briefly with other groups of Linné skiers before they took off.

Also, it was beautiful. I haven't been in a place with scenery that amazing in a long time. Most of the trees were coniferious and there was deep snow covering all the needles, branches and trunks. It gave it an other worldly feel. Actually, to me it looked like scenery from a video game - much too perfect to actually be real. We don't have great cameras, so it was hard to capture it on film, but here are a few from the first day.


From our apartment window, the first morning

That evening, Ross and I set out on a sunset ski with the camera. We skied a single track trail that had a fantastic beginning of narrow, steep bumpy downhills and then flattened out with gradual hills. Once again, the scenery was awe-inspiring. We plotted where we were going to build our own little cabin. 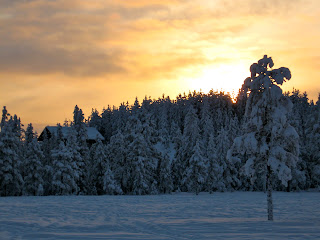 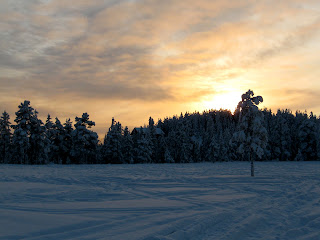 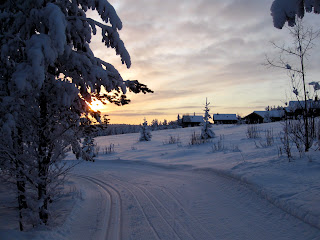 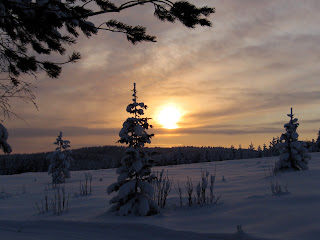 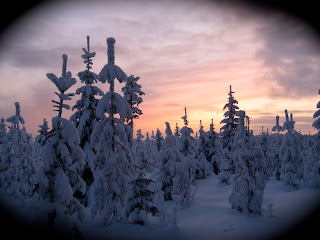 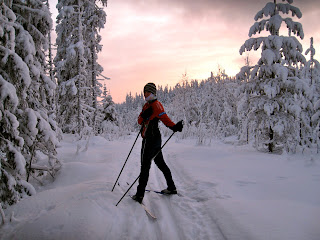 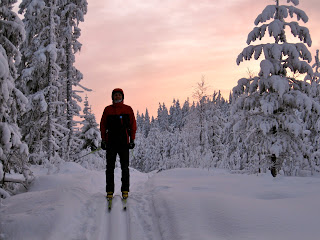 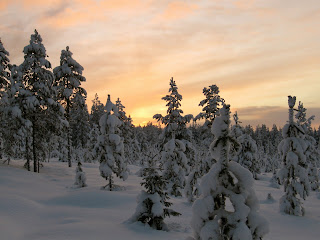 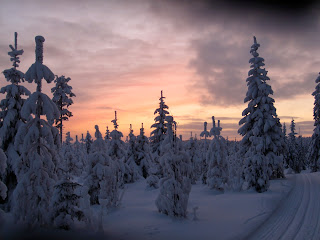 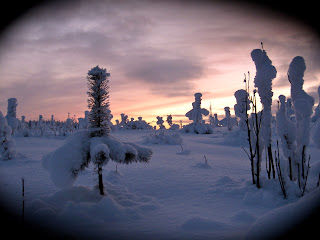 The only reason I stopped taking pictures is because it started getting too cold, both for me and for the camera shutter. Also, the sunlight was quickly disappearing and we did eventually have to finish the 10k loop before dark.

On Saturday, I set out on skate skis again with Ross. We were heading to the 10k elite loop that actually had hills, which I was excited about. Unfortunately, the conditions for skate skiing were horrible. I had no glide and so I would take about three steps and then come to a dead stop, even on the flats. I was worried that I had messed up my skis somehow in the morning when I waxed them, or that I was not as strong as I thought. I felt much better when Henrik returned from his evening ski and said, "You're right. It was horrible." The two others I talked to who also tried to skate also agreed, and it was nice to know it wasn't just me. So, Ross and I herring-boned up the hills, but still enjoyed the downhills. We didn't do the whole loop, but did go by the bear park and saw people feeding the polar bears.

Sunday was a bit warmer, but I didn't want to risk taking out the skate skis only to feel that same disappointment. So, Ross and I both classic skied the easier 10k, the 2.5 and the 1.k before heading home. What a great weekend!