The weather on the third day, Wednesday, was supposed to be the sunniest, so we headed to the northern part of the island for some running and hiking. The first run started from Cruz del Carmen, which is about 920m above sea level and in Anaga Mountains. The morning route went out to the village of Chinamada, and back through Las Carboneras. Chinamada is about 620m above sea level and up until the 1990s had neither electricity or a road. The houses are cave houses, built into the side of the hillside. We ran to just beyond the village to Mirador de Aguaide and looked at the views. There was a trail that ran all the way downhill to the town at sea level below, Punta del Hidalgo, but I still could not run downhill. Walking downhill was manageable today, but only barely, and running was still out of the question. Luckily, this route was mostly up after the initial downhill. We managed to run most of this, as it was never too steep or too narrow. We stopped about 3/4 of the way through for a bread and cheese break.

As soon as we arrived back at the car at Cruz del Carmen we drove further into the remote northeastern part of the island and down more switchbacks to the town of Afur. Again, the roads were superbly maintained and there were signs to the town, since it's a the start of a few different hikes. We ate lunch in the car, too tired and unmotivated to get out, and then refilled the waterbottles for the second run of the day. This run began with just under 2k downhill in the valley to the beach. Needless to say, we did not run this, as evidenced below.

We made it to the beach, and enjoyed the views. There were a few other families picnicking, and I think they probably just headed back uphill when they were done. 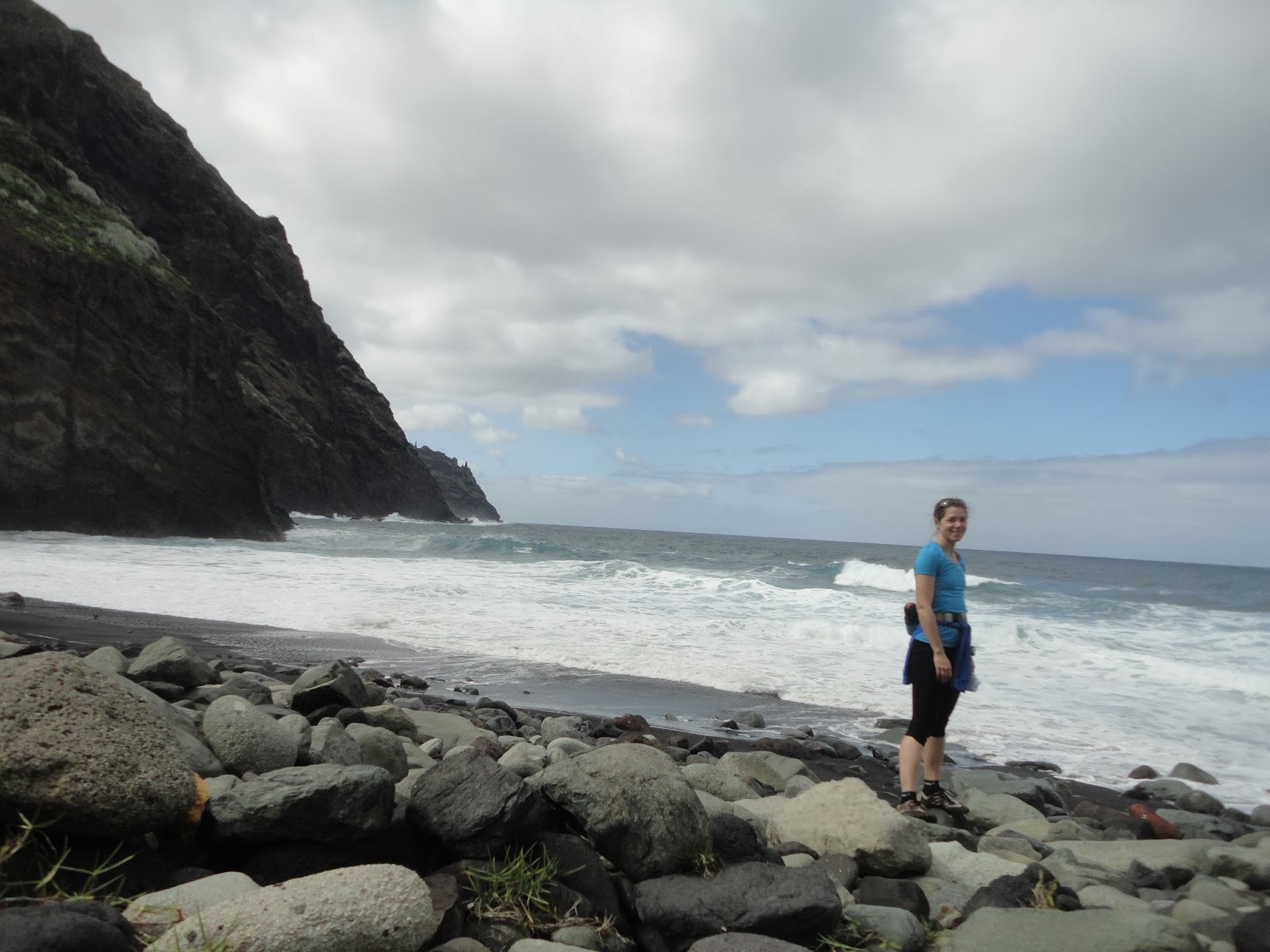 We had other plans, so we headed a bit back inland and then ran uphill so that we could run along the side of the hill, with it sloping steadily downhill to the water. This was an awesome goat trail, with fantastic views of the coastline the entire way. A bit dizzying if you tried running and looking off to the side at the same time. My rule became that if I wanted to look at the scenery, I had to stop running. I did not want to take a wrong step and be tumbling off the cliffs myself.

We were both a bit tired from the morning, Ross somewhat more than me since he had to carry the backpack (that's what we're blaming it on). Therefore, the running along the coastal trail slowly turned into just walking. We continued to hike through small villages and then above the larger city of Taganana. At this point we were both pretty tired and we could see the 300m ascent ahead of us. We hiked up and were happy to reach the top, with the sign pointing the way back to Afur.

Unfortunately, we overshot the car in terms of climb, so we had a downhill trail and then downhill on the paced road to get back. Needless to say, there was very little running here as well. We drove home the same way as we came, because we were tired and it was getting late. Stopped at the grocery store to pick up local wine (yummy) local cider (disgusting) and dessert (orange ice cream scooped inside oranges). 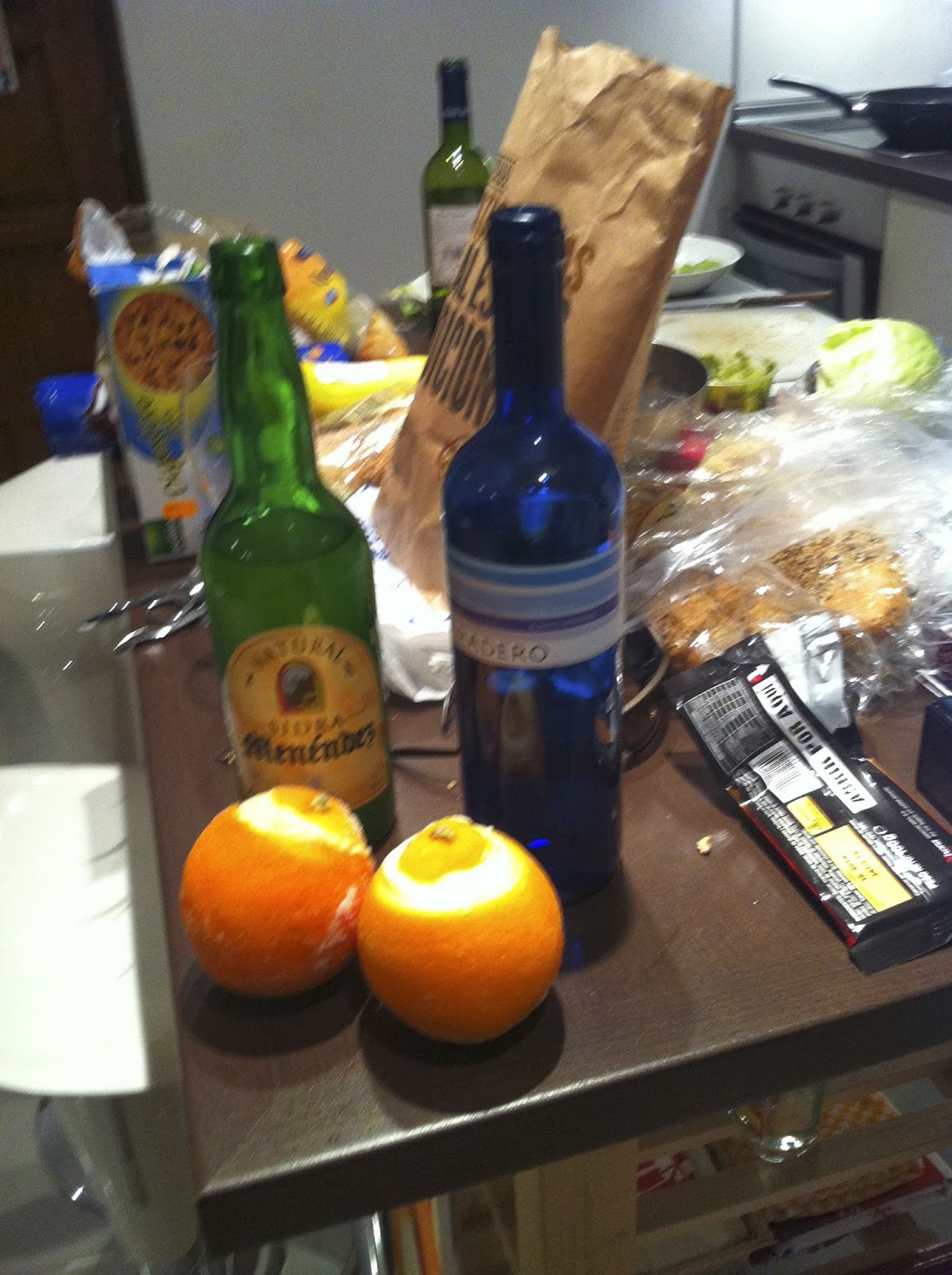 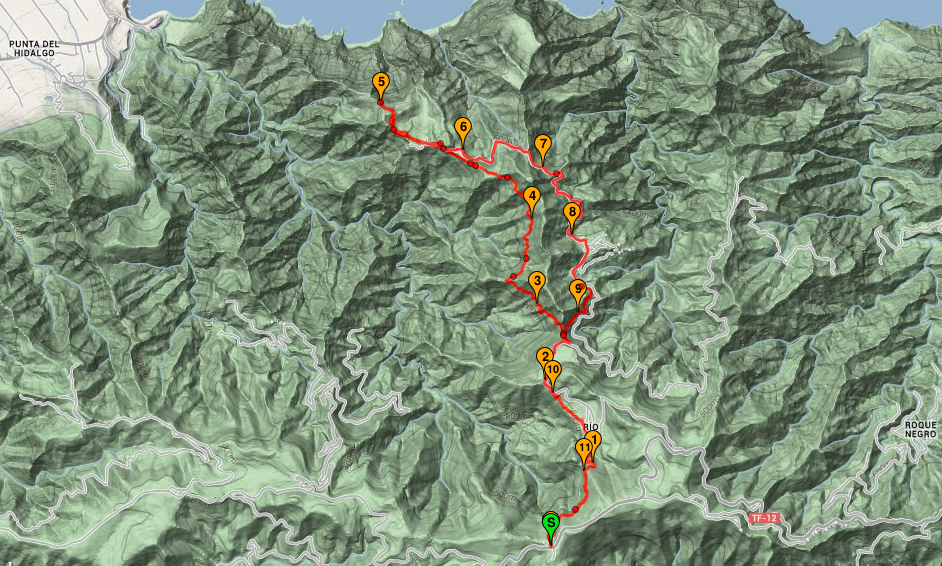 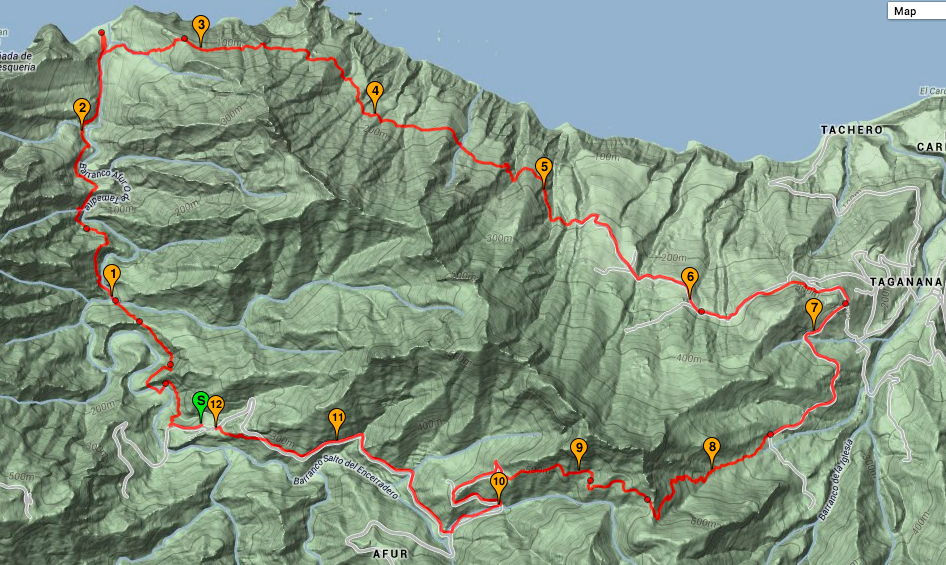 Posted by Samantha at 3:24 PM No comments:

Ross and I just returned from an awesome five days spent on Tenerife. We stayed in a small studio apartment on the north side of the island, just outside of Puerto de la Cruz. This was the perfect location. We rented a car, and we were just off the main highway that runs around the island. This meant we could get anywhere on the island easily, and when we were tired after a day of exploring we didn't have to drive extra switchbacks up to our apartment. We had wonderful views from our balcony, and there was a nice running trail just below the apartment that we did on two mornings when we didn't feel like going further. Click on the images to see them larger.

Views from the apartment balcony:


The apartment, all the pictures taken from standing on the bed 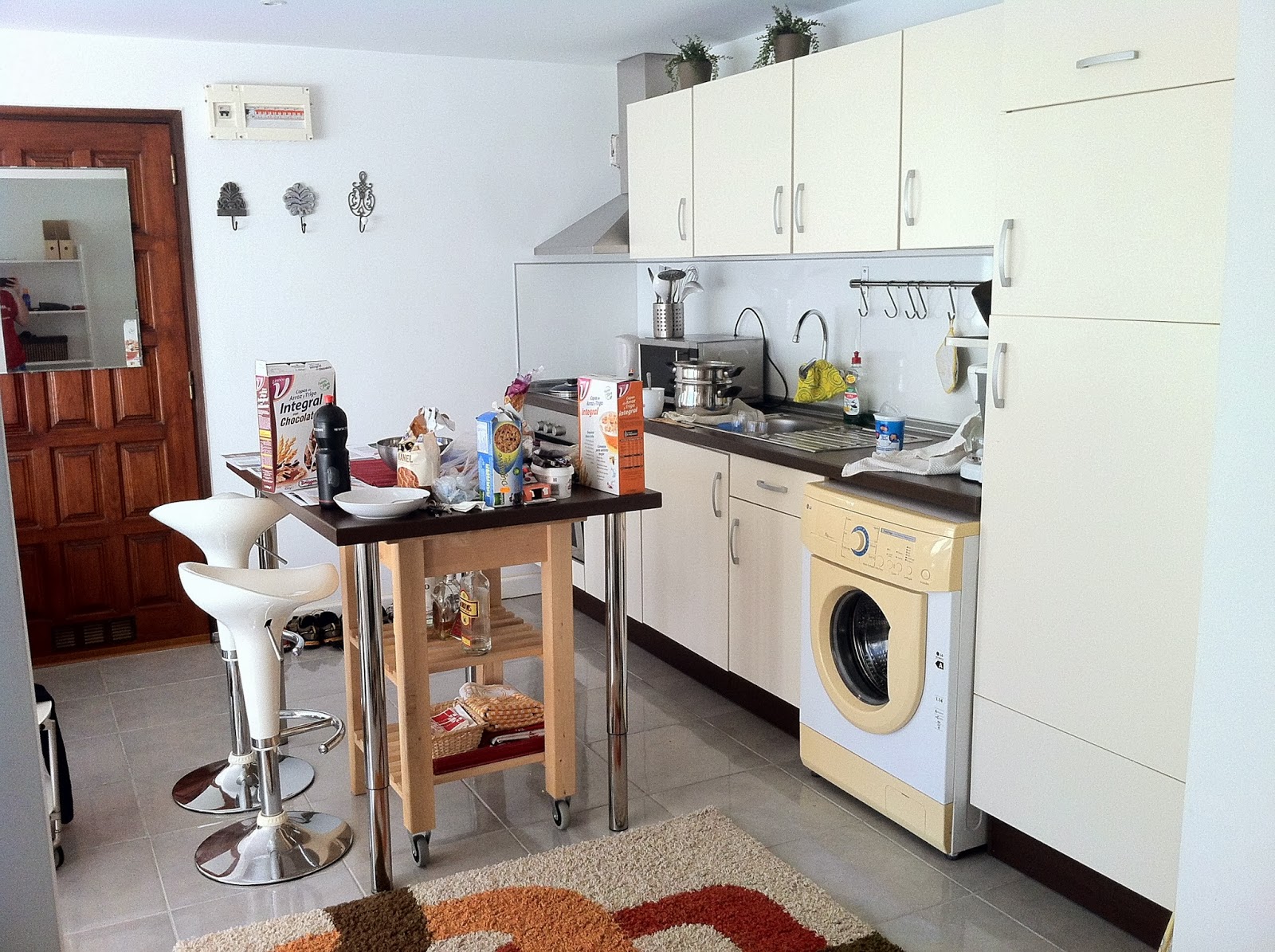 The first day we headed west, and drove up the switchbacks to the top of the pass. We were headed to the small "town" of Masca. We stopped in Santiago del Teide to pick up food and saw an interesting looking trail of crosses going about 400 m up the hillside. We hiked up and enjoyed the rather cloudy view, before heading up the switchback road to the top. We stopped to take pictures and enjoy the views, but it was incredibly windy. 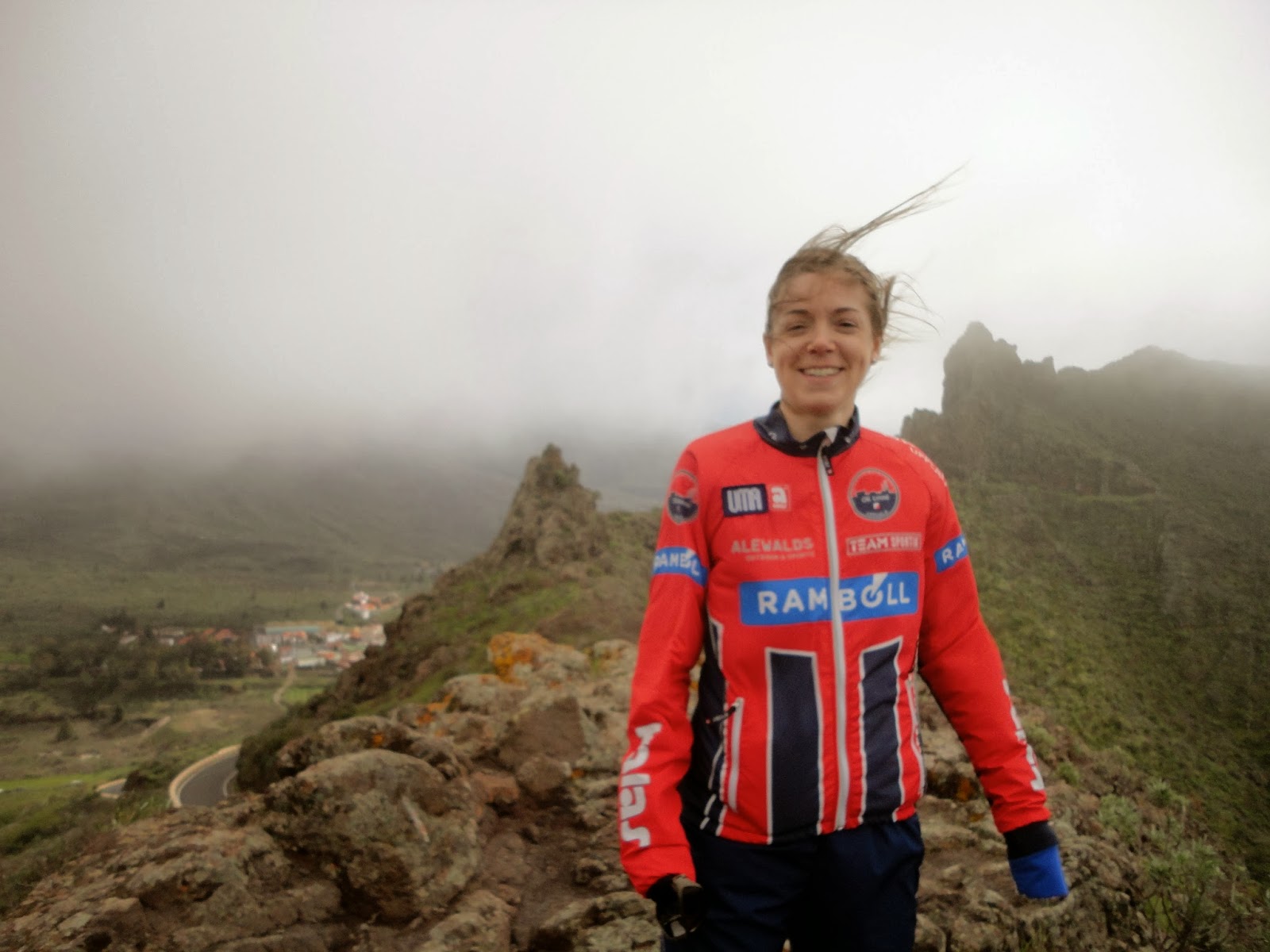 We made it to Masca, found a parking spot and starting running down the trail. It was a 6km run down, and then 6km back up again in the ravine. Before long, it became obvious that running the whole way would be difficult as the trail was narrow, rocky and often hard to see. We foolishly attempted to keep our feet dry in the beginning, before seeing that the only way to continue was down a small waterfall. After that, it became a bit easier to go, as we just walked through the stream when necessary. I thought this was the most enjoyable hike that we did because of the adventure factor. Scrambling up and down the rocks, wading through the water and losing the trail were all part of the fun. We made it down to the beach and had a quick picnic before heading back up again. It took us just about the same amount of time to go down as up.

I woke up this morning barely being able to walk. I could shuffle my way forward, but running downhill was just out of the question. The pain that I felt in my quads when running downhill was just unbearable, I couldn't do it. I could sort-of walk downhill with a funny gait, but that was it. So, in the morning we decided to explore the trail that was just below our apartment. It was a beautiful trail, and crowded with German tourists. I walk/ran most of the way with Ross, but then turned back before him.


The big plan for the day was to drive up to Teide and then hike up to the refuge near the top and spend the night there. The next morning we would wake up early and watch the sunrise from the top. Our plan was foiled, as the road up from the north side of the island was closed due to snow and ice. We emailed the refuge and they said that they would not be open again until Friday, which was too late for us. Also, the top of the volcano was closed, and remained closed due to snow and ice for the rest of our trip as well. Instead, we drove back downhill a little ways, and ran from La Caldera into los Organos, with views into the La Orotava Valley. I still could not at all run downhill this afternoon, but luckily there was a good mix of up and down. After a short bit of down, we had a nice long run uphill. We continued along on a narrow trail through pine trees, and joked about how beautiful the view was, when all we could really see was clouds.

Has it really been 4 months since we last posted here? Le sigh, it has.

We're still doing what we do best - eat, sleep, work, orienteer with a few changes in place. Ross started a PhD program in science (yep, science) at Uppsala University. It's probably about a 4 year program, so we will be hanging out in Uppsala for more than a few more years. Here's a photo highlight of... the past 4 months?


We do actually orienteer, but the camera never comes along.