There can never be too much Christmas baking

I've decided that baking makes me happy, especially this time of the year, so I'm baking up a storm!

I am getting a lot of my inspiration from instagram lately. This one is from displacedhousewife, and is a Chai Pumpkin Tart with Gingersnap Crust. It's so many of my favorite things all together! 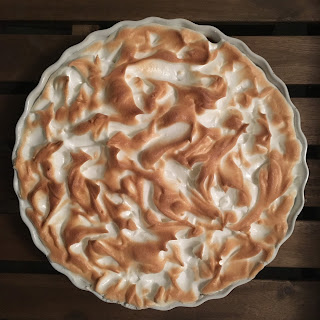 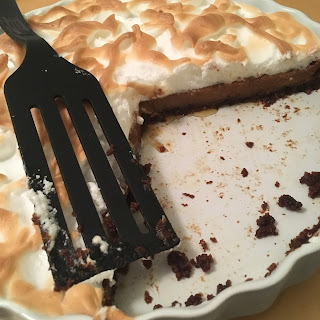 I had to use pepparkakor instead of ginersnaps, and I don't have my torch here so I had to brown the egg whites in the oven. Ross roasted a pumpkin earlier in the week, so I used real pumpkin here as well. I had a bit of a problem with the vinegar in the egg whites. I used the recommended amount, but I thought it then tasted like vinegar. I would say skip it, or add way less, as I think that ruined the overall appeal for me. Maybe because of this it sounded better than it tasted, in my opinion. That is not to say it was bad! Just didn't live up to my high expectations.

Next up was another instagram photo that looked amazing, Chocolate Linzer Cookies with Dulce de Leche from the whole bite blog. I like nut cookies and I don't think I've ever baked with Dulce de Leche. It wasn't sold in the local grocery store, so I boiled two cans of sweetened condensed milk for 3 hours. Success! 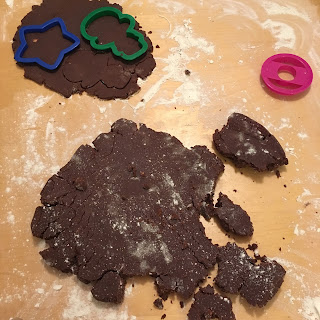 I had big problems with the dough. I think this was because I don't have a food processer, and so had to grind the nuts in a blender. Therefore they were more coarsely ground than desired, and so the dough did not hold together well. Rolling it out was challenging, and I could only roll small pieces. This meant it took forever to roll and cut all the cookies. 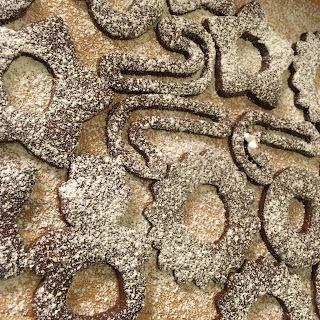 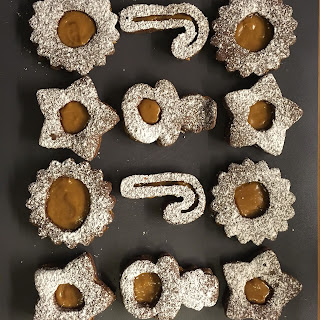 But then they turned out beautifully! Although the cookies were a bit dry after baking, when combined with the dulce de leche it was perfect. My only change next time would be to find a food processor and roll thinner dough. These cookies were almost too big to eat in one sitting. I also just used a knife to cut the inner circles out, whereas an actually cookie cutter would have made much neater circles. Not sure I would make them again, due to the amount of time it took (though with a food processor I would try!)

Next up was Smitten Kitchen, which I find to be one of the most reliable cooking blogs. Eggnog Florentines sounded just like the bit of Christmas that I needed. She warned the the florentines were a bit too buttery, and I looked around the internet for a better recipe but couldn't find anything (except maybe Cook's but I don't have a subscription to their website). They were greasy when they came out, so I laid them on a paper towel to help blot up the excess. 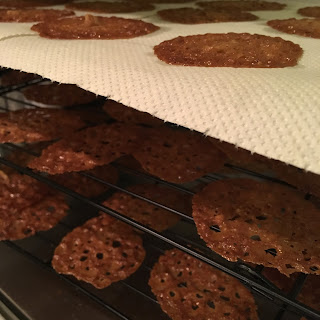 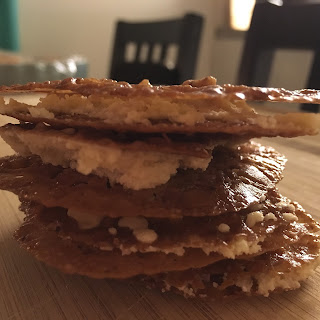 The eggnog filling was perfect. It sounds weird to add hard boiled egg yolks to a frosting, but it's just what is needed for the eggnog flavor. Again, assembly here takes some time as the florentines are delicate and will break easy if filled too quickly. These were amazing, if a bit rich. I still haven't filled all of them with frosting and find that the florentines are great to just eat on their own as well! I would make these again as a holiday treat.

To top it all off I was in charge of helping make fika at work. We are almost 80 people who work at the school, so making any of the above recipes doesn't make enough food. I also have been very stressed and busy with work, so I went for an old favorite. I doubled the recipe and baked it in my giant sheet (about 17in x 13in). I combined recipes so I could use my favorite brownie recipe from bon apetit with the frosting and ganache proportions from Sally's Baking Addiction, mostly because it was the first one I found when searching google. I forgot to take any pictures of the process, but I think I made a bit more than 100 pieces and this was all that was left the next day (wait, some were actually left!?). Roommate Emily introduced me to this recipe years ago at 25 Woodward and it's been a staple ever since. 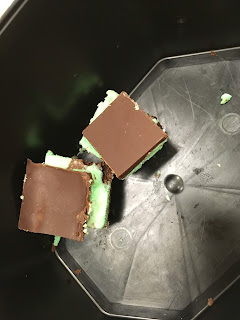 Last but not least since I boiled two cans of dulce de leche last weekend and didn't even use half of one for the cookies, I needed another recipe to help use it up. Ever since making Cinnamon Browned Butter Breakfast Puffs  (they are absolutely amazing, make them and eat all of them now), I've been a bit obsessed with browned butter. Even America's Test Kitchen says their favorite chocolate chip cookies are ones make with brown butter (I made them, and though good, I don't think my palate is sensitive enough to decide if they really are the best. Oooh, I have to bake different ones and try them side-by-side!). So when good ol' google turned up Brown Butter Dulce de Leche Cookie Cups, I was sold. 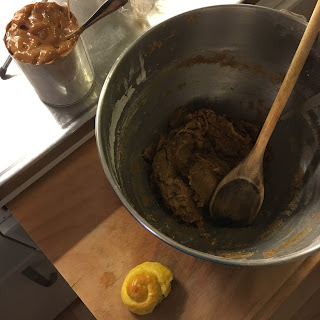 -- Oh, and on Friday night Hilda and I baked lussekatter (saffron buns) for the Lucia orienteering training on Saturday. I used the recipe in my favorite Swedish cookbook, sju sorters kakor, which I have in English. The basic recipe is the same everywhere, though I think that I always add too much flour because it's just too sticky and I can't roll it. Therefore, mine are a bit chewier and denser than ideal. I also used two packets of saffron, whereas recipes like this one, recommend just one. -- 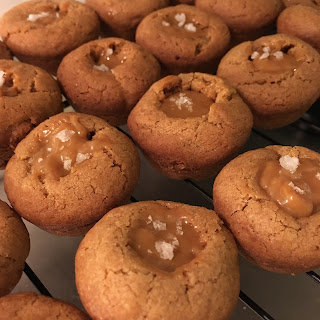 Back to the topic, which was these cookies and they were amazing. Ross especially loves blondies, and these had the blondie texture and brown sugar taste. Just more so because of the addition of browned butter. These were easy and yummy and I would so make them again! A little bit of salt on the tops rounded out the flavor perfectly.

Ok, so that was all just in the last 8 days.  Let's see what next week brings!