Hello Friends. I'm excited about easing back into a better habit of posting to this blog. With that in mind, I thought that I would share a couple of pictures and stories from my recent trip to the hospital in nearby Enköping, where I underwent a voluntary surgery to remove some hardware that had been placed in/around my elbow last summer .

So last summer, I broke my arm a couple of times. And after a suitable recovery period, I was still noticing, in a painful way, the protruding ends from the screws used to hold the bone chip in place. For once I actually planned enough in advance and scheduled a surgery a few months in advance, to occur in late spring.

So, on Friday the 17th of May, I got a ride down to the hospital early in the morning. A short stay in the waiting room, attempting to read Swedish gardening magazines, and then I was prepped and made comfortable in the operating room. I was out under general anesthesia, but as the gas and the injection started to take effect, I was being introduced to a bunch of doctors and nurses that were going to be sitting in and observing the procedure. That was incredibly strange, because I was coping pretty well with getting all the instructions in Swedish up until I started to fuzz out and then all the new people talking in Swedish became a real challenge.

Well, I guess it all turned out okay, because a couple hours later I woke up and was given a tube full of (lucky for me, thoroughly cleaned) screws, washers and wires as a souvenir. I was reminded of a previous surgery experience in my life, when I was expected to drink a glass of juice, and eat a sandwich. Back then, Mom helped me finish my ginger ale to expedite my escape from the hospital. This time I was able to manage on my own, though I still felt a bit dizzy from the drugs when I shucked my scrubs and got back into my street clothes to catch the bus back home.

Later that evening I headed up to an orienteering event in Sundsvall, where I got to be a super-fan for Sam and the rest of the Linné crew at the final event of the Silva League races. Here is a photo from facebook of Sam finishing the chase start/mass start final on Sunday. It's a cool shot by our friend Camilla, as neither of Sam's feet is touching the ground.


I wasn't running in the Silva League races, but I did go out in the forest and orienteer on some open courses. I appreciated having an excuse to take it a bit easier and walk on the steep hills :) A few stitches won't keep me out of the competition for long!

In closing I will include a photo taken now, almost two weeks later, showing the current status of my healing scar. As you can see, I have already lost 10 of my 13 stitches, a few which spontaneously pulled out and several more from bad habits when it comes to wound care. 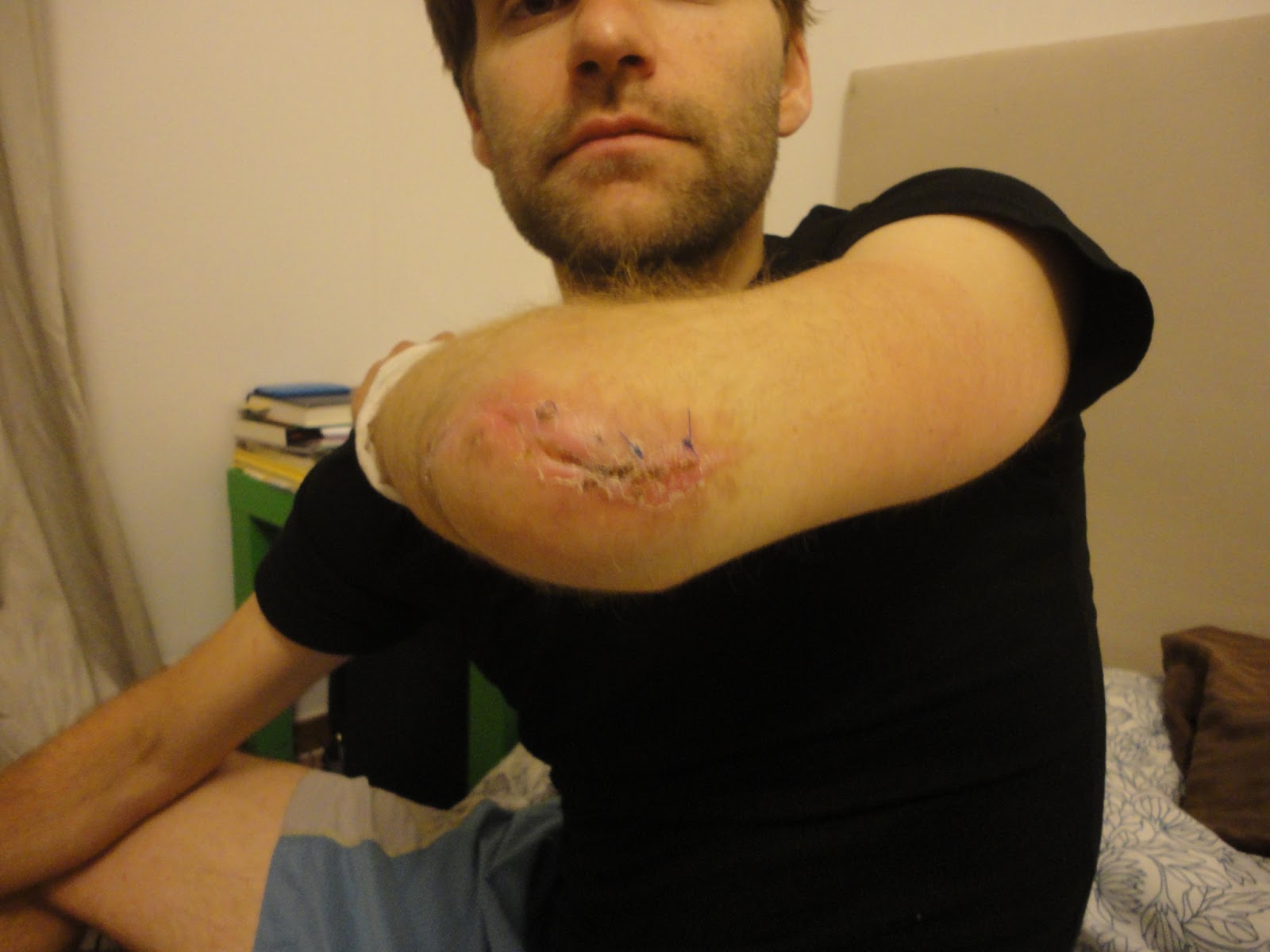 Still, even with the excellent progress shown here with the wound healing up, I wasn't able to put direct pressure on them yet and therefore I opted to skip the plank section of our Monday night Rockgympa session. Maybe next week!
Posted by rosstopher at 11:05 PM 1 comment: