Yep, there are still plenty of things we haven't done yet in Uppsala and this weekend was filled with Firsts.

On Friday night, I tried flavor tripping. We used a tablet form of the berry and ate limes, lemons and tomatoes. It was pretty amazing. We liked it so much, we had everyone try it at Sunday Bloden Fika. 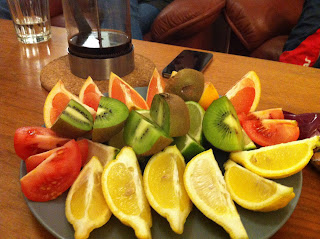 Basically, it gets rid of the sour/acidic flavor and all you are left with is the sweetness. Therefore, eating a lime is like drinking limeade. Eating a tomato is just weird. It's pretty awesome, but I think the first experience was the best, when it was so unexpected.

Then, on Saturday night we made sushi. Although Ross and I bought a sushi mat years ago in Newton, we never even opened it. When we were home over Christmas raiding our storage locker, we found the sushi mat and brought it back it Uppsala. Between four of us we made 88 pieces of sushi. While watching Melodifestivalen, we ate 83 of the pieces.


It was not nearly as difficult as I thought it would be. I prepared the rice earlier in the day, following the recipe here. I made 3 cups of dry rice and that was just enough for 11 sushi logs. We then filled them with some combination of smoked salmon, shrimp, cucumber, carrots, lettuce, avocado, red peppers, and sesame seeds. Of course, then I added plenty of wasabi. Heavenly.

The third First of the weekend was ice skating with the long distance blades. We drove down to Ekoln Lake with Boris and Alli. I skated once last year in Oslo, but before that it had been years. I was a bit wobbly at first, but after awhile (and once the shin and arch pain went away) it started feeling natural again. It was the most beautiful winter day. Full, bright sunshine and still relatively warm, about -6°C. And the ice, oh, the ice. Since it was warm last week all the snow melted. The last few days have been below freezing again and everything refroze into a smooth surface. You could skate anywhere you wanted around all the lakes. It didn't matter if it had been plowed or groomed. Boris wore his gamin, and you can look at the track.