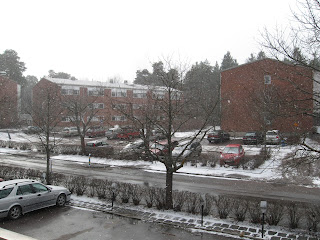 And I thought it was spring? Supposed to be warmer later this week, so I'm sure the light covering will be melted by tomorrow morning. But for today - Brrrr!

Also, for St. Patrick's Day I decided to bake something Irish. Swedes don't celebrate St. Patrick's Day, but since we were having people over for dinner I bought some Guinness and baked, for the first time, Irish Soda Bread. The recipe called for baking the dough in a cast iron skillet, but we didn't have one. I had read in other recipes that you could bake the dough on a baking sheet. It would spread out a bit and it wouldn't be completely uniform, but that was ok.

When I poured the dough on the baking sheet, it spread out more than I wanted it to. I pushed it together in the middle and put it in the oven. After about a minute I checked in on it. The dough had spread out all over the baking sheet and was starting to drip off the sides. Panic!

I took it out of the oven and tried to pour the dough off of that baking sheet into another baking tray that has sides. This wasn't as successful as you might think, since dough doesn't pour in a nice funnel, it just runs off the entire tray. But then I realized that I didn't really want the dough to spread out on the entire baking tray, because then I would have more of a cookie than a loaf of bread. So I took out a largish pie plate and tried to pour the dough into that instead.


This process resulted in this:

Eventually I managed to salvage the situation and I scooped the remaining dough into the pie plate. It baked wonderfully and tasted great! Happy ending after all!
Posted by Samantha at 11:11 AM 3 comments:

In our free time during the orienteering training camp, what did we do? We orienteered :) Niklas made this urban map when we arrived at our afternoon training and he was still too full from lunch to go train. Urban is what they seem to call any of the microsprints, even if they're not really urban. Ross and I have fully yet to grasp this strange Swedish way. Niklas just makes one map of a small area, and then everyone runs with the same map. I put together a video and posted it on the Projekt Meteorit blog.
Posted by Samantha at 4:13 PM No comments:

Ok, it would be tempting fate to say that early spring has reached Uppsala, but it seems we brought some of the sunny weather back from Portugal with us. On Saturday Ross and I went into town to do some shopping and enjoyed walking along the river in the sunshine. We got fantastic tasting gyros from a place on Svartbäcksgatan, but I can't remember the name and Google street view is too old. Ah, Ross found the receipt - it's called Costas.


Everyone else seemed to have the same idea and there were people sitting and strolling all around town. It made me laugh to see people sitting on the docks like it was summer, dressed in a winter coat, hat, gloves and eating ice cream. You really appreciate the sunshine when it's so dark in the winter!

On the way home we stopped by our favorite Asian food store and tried not to buy everything in sight. I think the only extra thing we ended up with was a giant tub of green curry. We made Hot and Sour soup for dinner, and the recipe is fantastic. Restaurant quality. Ross also was amused by some of the selections:

Back home in Uppsala

We have returned home to Uppsala after a fantastic week training in Portugal. Ross did every training with complete enthusiasm. I thoroughly enjoyed the entire week, although I had some stomach problems earlier in the week and then caught a cold the day that got better. Luckily, a running nose and sore throat couldn't keep me out of the terrain and I was able to go out and walk or jog most trainings. The two day trainings I did skip I took video, so some super awesome Portugal training videos will be up later this week.

The weather was fantastic. After one cloudy and drizzly day early on, we had bright sunshine for the rest of the trip. It was warm enough that sitting out in the afternoon sun in shorts and a t-shirt was comfortable, but running never got too hot. Just perfect. Eventually my attackpoint log will be updated with maps and trainings and I'll put up pictures and video, but for now, here are a few more random pictures.

Too much other fun things to do than sit on the computer, but here's a random selection of pictures off my camera.

Posted by Samantha at 2:16 PM No comments: