Although I was just thinking about how our first week here in Uppsala feels like a week long orienteering training camp, I am currently sitting outside with my feet up and enjoying warm mug of coffee. There is a warm breeze blowing and not a cloud in the sky. It's autumn here already. The leaves haven't changed color yet, but the days are warm and the nights are cool. This is by far my favorite time of year and as fantastic as it is here, it makes me miss home. I love fall at home. The crisp weather, the pumpkin beer and coffee, apple picking with roommates, baking with apples and cinnamon - it's a cozy time of year, without the overwhelming darkness and coldness of winter. The fact that it's already autumn here means that winter is soon on its way. But I'm going to make the most of this weather while it's here!

Ross and I have continued training with the local orienteering club, OK Linné, this week. We joined a smaller group on Wednesday night to prerun their elite courses for a meet they are putting on in October. I didn't finish the 8.5k women's course, as Boris and I set a 90 minute meeting time and my legs were quite tired. It's overall very flat here, but going two steps up the small bumps over and over again is exhausting. Plus, the swamps are apparently good running, but because it's been so wet they are very squishy and energy sapping. Boris warned me beforehand to try to run with the grain of the contours instead of over them all, and that was very good advice (not that I managed to follow it well). Something to work on in the future! Ross also had a long outing and Boris and I had already made and eaten dinner by the time he arrived home after his 12.8k course. It grew dark before he finally stumbled home and Boris and I were beginning to contemplate how we would go about a rescue mission.

Ross and I borrowed the club car on Thursday and drove south to pick up some furniture from an older couple in the club. The google directions for the end of the drive looked like this: 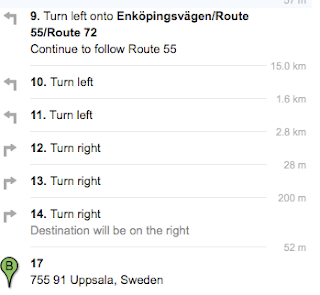 Needless to say, I was a bit worried those directions wouldn't be quite specific enough to get us there. I therefore brought the computer with the map in the car. They in fact live off a series of dirt roads with no name. It doesn't take long to go from city to very rural. The couple was super generous and they loaded up their trailer with two armchairs, a coffee table, curtains and a sofa bed and drove it to our place. We unloaded everything and now our living room has gone from very empty: 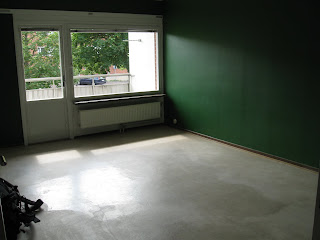 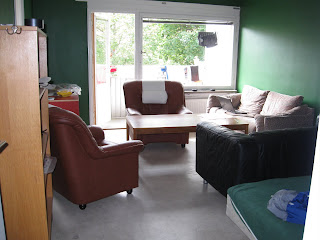 We did an interval training with the club in the evening, with 1 minute pickups along their test loop. It was all on trails, although most of them are small muddy single tracks. After intervals the club gathered behind the clubhouse to grill grillkorvs. They call them sausages, but they are really just hotdogs. More socializing was done and we met a few more people in the club. Then Patrick and Mari came back to our place for ice cream and games. 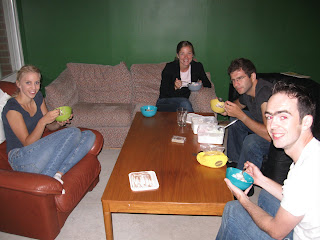 The next morning (Friday) we joined Patrick and Mari at Backbanan. Uppsala is very flat, so in order to work on hill climbing some members of the club made a hill course on the only (slight exaggeration) hill in Uppsala. I wanted to go try it out and learn the route, so I ran with Mari. The steep uphills were killer, even when we weren't going all out. I'm looking forward to training on this and seeing how fast I can get!

Last night was another first for us - Night Orienteering District Champs (Natt-DM)! We donned our Ok Linné outfits (there's a picture of this on Mari's camera) and drove east to Länna. Ross ran men's elite (brave soul) while I ran a 3k open course with Mari :) I borrowed a light from a local club member and headed out into the darkness. We made a few mistakes (it's hard to stay on a compass bearing in the dark!), but had lots of fun. It was a beautiful night and so waiting for the boys to finish was quite pleasant.

And now it's a beautiful Saturday morning. Ross and Boris have returned from their morning run (I opted for coffee on the balcony instead) and now we will head out into the city. We hear there's a flea market that we're going to hit up for cheap stuff :) And I need to find myself a used bike so that I can get around more efficiently. Tonight Ross also has lasertag plans with the Ok Linné boys. We hear it's quite competitive :)
Posted by Samantha at 10:57 AM No comments:

Back home in Uppsala

After a long journey through Switzerland and France, we have returned home to our apartment in Uppsala which is exciting because we once again have internet!

In an effort to keep this post short enough to read, we will just skim over the Swiss Orienteering Week and the World Orienteering Championships, but if you want to see more from those few weeks, you can check out photos on Sam's Facebook Page and visit the US Team Blog, which has some posts from our racing in France.


In Switzerland, we were staying in the town of Laax, and we were lucky enough to be around during the Swiss National day on August 1st, when we got to see some fantastic fireworks in the center of this town. It was very exciting standing there watching, though some of that excitement came because a few of the unofficial fireworks that got set off came whizzing back into the crowd and exploded with a  boom just over our heads!

All of the days of competition in Switzerland were held high up on the slopes of the surrounding mountains, which meant that we had some epic views.

Too soon, the relaxing week in Switzerland was over, and we headed back to France to prepare for the World Champs. For the races we stayed in Aix-les-Bains, and spent everyday driving up the winding roads to the plateau on top of the ridge where all the maps were.

For the races, I (Ross) was quite satisfied with my qualifier races, even though I did not qualify for any of the finals.  Sam had a less than stellar long distance qualifier, but qualified easily for the final in the Sprint. This meant that she got to race two intense short courses in one day, and by the end of the day she was feeling quite tired. Still, good enough for 38th position, not the result she was looking for but very respectable.

The last race of the week was the team relay and both of us got to run the lead off leg for our teams. Sam had another solid performance and was only 4 minutes behind the lead runner after her race. I was quite confident going into the race, confident enough to run right past the turnoff for the first control... even though all the rest of the runners were cutting off the trail just there.  I quickly corrected my error, but I ran the whole course alone and was quite sure that I was trailing very far behind the rest of the teams.  I was pleasantly surprised to learn, once I finished the course, that I wasn't so far back and in fact we were in front of the Canadian team, our big rivals.

So that was a recap of the last 3 weeks, and brings us up to last Sunday, when we got on a plane heading back to Sweden. Boris, Sam and I woke up on Monday morning with a long list of things to do and first on our list was to try to get some things for our house, like forks and plates (as we had eaten our spaghetti the night before with spoons out of cereal bowls.) The used goods store wasn't very helpful, but our stop at IKEA was very fruitful. Several hours after arriving, we departed with a good start on furnishing the apartment.

Later in the evening we got to meet some friendly people in our new orienteering club, as many of them had either offered to give us their old furniture or to help us transport some  of the larger pieces. By the end of the day, we had an equipped kitchen to cook in, a table and chairs at which to eat dinner, and a bed to collapse into... and that pretty much describes our Monday night.  Though we had to guess a little when making our pizza dough with Swedish yeast and a Swedish oven.

On Tuesday, we attended our first club training with OK Linné, which was a great time to meet about 35 members in the club, and also a great time to meet one of the nearby forests.  I got thoroughly and happily lost a few times and it wasn't til the very end of the session that I felt like I was in control of the navigation and running.

We followed up the training with a dinner at the clubhouse, with soup and a discussion about the upcoming Swedish Championship races. The presenter had a powerpoint presentation which highlighted the things we should expect from the many races that make up the championship series. If Sam and I get registered in time, we will get to race in these competitions too, against the best in the country.
Posted by Samantha at 3:18 PM 3 comments:

A lack of internet has prevented us from adding anything new, but we will be back soon! We are currently at the World Orienteering Championships and you can follow the results here.
Posted by Samantha at 8:07 AM No comments: