Ross and I are going to the World Orienteering Championships in Lausanne, Switzerland in July! I'm excited to be a part of a fantastic US Team!


Time to get our game faces on.

Have no fear, I have no given up hope of keeping up the blog! But these past 3 weeks have been incredibly busy with orienteering adventures. I have to pull up my calendar to even remember it all. First, we went to Switzerland with other Linné club members to join the Swedish national orienteering team on a World Championships training camp. It was actually in the same region where I was last October, so now I have plenty of practice running though green briar. My poor legs. We really enjoyed our time there, and the weather was basically like summer. It was fantastic. 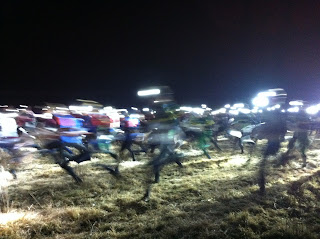 Then we went away for the long Easter weekend for a day of training and 4 races. The first night was a 2 person night relay. I wasn't planning on running, because frankly I was done with night orienteering, but someone got sick and I just couldn't say no. It was a beautiful night and a great way to end the night-o season.

Then we raced a long, middle and relay on Saturday, Sunday and Monday. The highlight, as usual, was the relay. It's so much fun to be a part of an amazing club and cheer for everyone. We had 6 women's teams, which is also awesome. I started off quite poorly, basically punching the first control in 80th place out of 85. But I worked my way back and our second leg runner had a great race. During the second leg three of the Linné girls were running together in the lead and the announcer joked "What is this, the Linné club champs?" I'm just bursting with pride at how well we're all doing. Sure, we have our ups and downs, but it's a great time to be a part of the girls in Linné.

Now, off to Göteborg for the Silva League races, which are really the first big deal races of the season. Then I'm staying there for a 3 day sprint camp with the Swedish national team. Fun!
Posted by Samantha at 10:25 AM No comments: