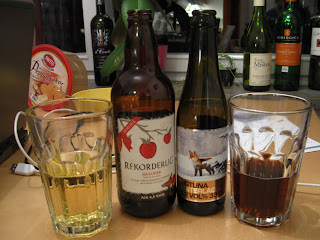 There were doubts expressed at the Linné Gala that Jul Cider existed. But I found some at Systembolaget and I figured Ross could get in on the Jul flavored alcohol testing. The cider was Rekorderlig Julecider, and says it has an apple cinnamon flavor. 4.5% alcohol, 50cl and 15kr (~$2).

I'll start with the good news. The beer was much better than either of the beers I bought at the grocery store. It's now been over a week since I finished it, but I remember enjoying it :) Not too heavy, but still rich with flavor. I don't think Ross even tried it. It definitely makes my list of Yummy Things to Drink Around Christmas (YTDAR), although it obviously wasn't super memorable.

Ross tried the cider and made a weird face. I tried the cider and thought it tasted like cider. I guess I don't have a sensitive enough palate, because Ross thinks it tastes like an apple cinnamon candle. I'm assuming he meant that it tastes like an apple cinnamon candles smells, unless he's been going around eating candles. He couldn't drink the rest of it and I was forced to finish it a night later. Tough life. Unfortunately, since I don't really like cider and Ross couldn't even drink it, the cider does not make our YTDAR list. 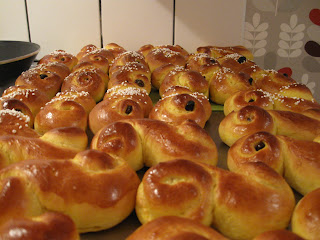 Next week is the Advent and Swedes are really gearing up in style. The tree in our courtyard is lit with lights and freshly baked lussekatter is sold in every store. Lussekatter aka Saffron Buns aka St. Lucia Buns are eaten in the weeks leading up to Christmas, and especially on St. Lucia Day, which is December 13th. This is the day you picture when you think of Sweden - young blond girls dress up in white dresses with a crown of leaves and candles in their hair. And boys wear dunce caps. 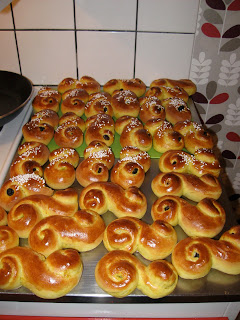 I decided to join in on the fun and baked my own lussekatter last night. I had a hard time finding saffron. It couldn't see it anywhere on the shelves, but I knew that they must be selling it this time of year. Eventually I asked someone, and you have to buy it at the register. It's about 12kr ($2) for .5g. I don't know if they are selling it at the register so that people don't steal the expensive spice, or if they are trying to ration it - afraid people will buy too much if they can just grab it off the selves. Maybe Norway should start selling butter from the register as well? Ross and I are going to Oslo, Norway this weekend to get our visas and to celebrate Thanksgiving with Cristina Luis, Caroline Luis and Melissa Trout. When asked what we could bring, they asked for butter, because all of the stores are out of it. I'm freezing 1kg of butter and I hope they let me carry it onto the plane. And I hope it's not too warm.


The lussekattor recipe came from my new favorite cookbook, Sju Sorters Kakor:
I also made my own eggnog this week, using this recipe. It's really good, but then what does one expect when they mix together, milk, cream, cinnamon, cloves, and sugar? I halved the recipe and added a few pinches of pumpkin pie spice.

I'll leave you with two fun links. One is an article about the different types of cakes in Sweden and the other explains Swedes perfectly ;) Some of my favorites are 14, 54, 81, and 139.

Lussekatterna looks very yummie! They use to be best with milk or even better...Oboy!

Yummy! Bring some of that deliciousness home! Also, your description of the Swedish girls just made me think of Kirsten, of American Girl Doll fame. She wears that outfit in her Christmas story, right? I think that's how I know it. Happy belated Thanksgiving!!!

That's some really good looking lussekatter - some with pärlsocker! Saffron: Cheapest mail-order here is about $5/g. After the Juleskum adventure, I suggest that you must explore Glögg (I have a good recipe) and then next try to figure out how many ways you can pickle herring; and to taste them all -)) !

I planted some saffron crocus bulbs this fall. They came up and are doing nicely - a few even divided, but they won't flower until next fall. Somehow I have to make them think they live in a desert next summer. And remember where they're planted around the yard.

Lussekatter are quite good - sweet, without being too sweet. Perfect with cofffee. Steph, we can bake together when I come home. And yes, it also makes me think of the American Girl doll :) Ross and I tried nonalcoholic glögg from the store, and it was quite good. Next step is to make my own. I would love your recipe, Hans! Huh, I could start my own saffron plants in the window! I wonder if that would work - not too warm and not much sun here....