A break from our Christmas programming

Last weekend was so much fun, it deserves its own blog entry before we move on to more reviews of Swedish Christmas foods. Saturday night was the Linné Gala and Sunday was Vinterrejset. Before the Gala, Ross played paintball for the first time with some of the boys.
He came home covered in welts from head to toe. It's a good thing he didn't have to wear a short dress to the party. He said that it was fun, but the pain of being shot (and he was shot a lot) slightly outweighed the fun. He's glad he did it this time, but he'll probably pass next time.

Later in the evening we donned our fancy clothes - I packed one dress from the States and he packed his suit. I picked up some used shoes downtown, which have to be my best purchase here yet. The evening was very entertaining. We all got map pieces that we had to match to maps on the tables for our seating. I was at the same table as Ross, so only one group had to speak English with us :) I am unbelievably grateful at everyone's willingness to switch to English, but I always feel a bit guilty. I need to study my Swedishes more. Really, I should take a class. But classes cost money...
Everyone was dressed up and we drank, ate, danced and played musical chairs. Yes, musical chairs. I was skeptical when it began, but it was quite fun. I am very proud of my third place finish, although I did lose an earring in the process.

Of course, since Ross had the camera, we didn't get any pictures of the two of us dressed up together. Maybe next time :)

Sunday morning, much too early, our alarms went off and we rolled out of bed to get ready to bike to Vinterrejset. This is a fun mass start race with a twist - or many twists. Lisa had agreed the night before to run with me, as there are often clues written on the map that I would have trouble reading. I was grateful to have company for what is often a 3-4 hour race. You can see all my maps with my routes:
Map 1
Map 2
Map 3
Map 4

We arrived a bit later than planned and everyone was heading to the start. Luckily, Albin agreed to take us the VIP route, and we cut through the woods and arrived in time.
When we started, Lisa started reading and translating the sayings on the map. The only thing that sounded helpful was the advice to go right to #7. We started with many of the other girls, but we split up a bit in the mini-score section. Unfortunately, we forgot the advice written on the map going into #7 and went around to the left. There was a control in about the right spot, but it had a sign asking if it really was the right control... something was off. The map matched, but not perfectly. People were running around in all directions or standing and conferring with those around them. We went with the foolproof method of watching where other people were going. "There are people coming from over there!" So over there we went :) Then the second foolproof method - Kristina saying, "I see a control!" and all of us running to it. It was our control, but it was on the wrong side of the housing complex. Turns out they mirror-flipped that section of the map.
From then on, Lisa, Kristina and I were a team. We finished the first loop, with another little mistake at the end. The second map started with a contour only map, with contour interval being .5m. With my help, we overran the first control and met up with our fourth teammate, Jacob. We ran the rest of this map pretty well, although not perfectly. We really made up time on the mini simplified map section. 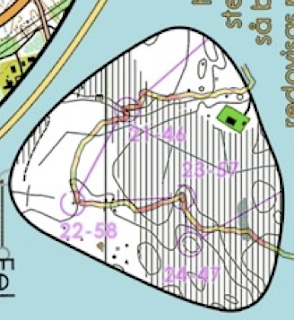 This is a quickroute, for all you nonorienteers. It's the route that I took according to my GPS watch and the colors refer to how fast I was going. Red is slow, yellow middle, green fast. You can see the red bump right before 21, which is where we met the other group of girls walking toward us. They had been searching for the control for awhile with other people. I was convinced it was further though, and I dropped a bit on the hill and found the boulder. I called over my group, but only Lisa and Jacob appeared. Where was Kristina? I called out for her, but we were eager to move on before everyone else also found the control. A few more half whispered shouts and Kristina came running to us with others hot on her heels. Suddenly, the competitive nature in all of us (ok, maybe just Lisa;) ) kicked in and we flew, straight and true to the next 3 controls. My GPS track doesn't want to go to 24, so either it got messed up or the control was in slightly the wrong spot.

At 25, the lead group caught us, already on their 3rd map. I realized after we punched 25 that something was wrong with 26 and 27. I thought that a whole box of the map had been rotated, but we were having trouble rotating it so that it matched. Someone finally realized that there were two strips of the map that had been cut out and switched. 26 was therefore still in the correct spot, and we would head to the field for 27.


We finished the second map and took a quick stop for some food and water.
Before we started map three, we had to stop at the puzzle table and assemble part of the map. Lisa cut out the pieces and we glued them onto my map. Unfortunately, between both stops, I had cooled down a bit too much. My fingers were so numb I had a hard time getting the map back into the map case.

The first control on this map was in an area where they took off the contours. After that I had to lead the group around the puzzle section since I was the only one with that part on my map. My favorite moment was when Lisa looked at her map and thought we were going the wrong way :) She only had a blank section :) Luckily, my navigation proved steady and true and led us to all the controls with no mistakes. The next section was an area where the map between the two controls was blocked out. This was where we made probably our biggest mistake. We drifted a bit left without knowing it and hit houses. We thought they were the houses on the east side, when they were really the houses to the north. We wandered around a bit until I recognized two boulders and relocated. Then it was onto the quiz section.

At the beginning we were given a paragraph about mushrooms. On the map there were questions and each question had 3 possible answers, coded 1, X and 2. Answer the question correctly and run to matching control.
I helped not at all in this section, and we did it perfectly. Finally, on to the forth and final map! This map of a scale of 1:2000 and .5m contours. We were pretty clean, but I was getting quite tired. My knee had been aching a bit the whole way, but now my legs were just tired of running. As enjoyable as the whole experience was, I was quite happy to finish! Now to bike back home... :) You can read about Ross's experience on his attackpoint log.

I was so exhausted that I made dinner and climbed into bed at about 5pm with a book. Ross, on the other hand, didn't eat dinner but instead went to gympa and then watched part of Olle's bandy game. What a weekend!
Posted by Samantha at 10:35 AM

It is indeed :) They needed English sayings on the map for their American contingent, and Boris came to their rescue.