April 30th is one of the biggest celebrations in Uppsala. Valborg is a holiday also known as Walburgis Night, which celebrates the coming of spring. The Wikipedia article, as usual, does a good job describing Valborg in Sweden and in Uppsala. In Uppsala, it seems to be the biggest holiday/party day of the year, especially for the students. And, since Uppsala seems to be mostly made up of students, it seems like the entire city is partying from morning til night. The bass from the parties in the nations could be felt throughout the entire city.

Ross and I headed into town in the morning with visitors Cristina and Melissa to watch the raft race, Forsränningen. In the week before Valborg, students gather on the festival grounds and build rafts that they will ride down the river and over two small falls. They are all creatively painted, with accessories and costumes. The highlight is watching these rafts try to go over the falls, but the crowd around the bridges in that area was too deep to see through. We went upriver and joined Johanna (a fellow Linné clubmate) and Emily Kemp, who was visiting from France. We sat with them on the bank, surrounded by people picnicking with champagne and strawberries.

I think Ross took better photos with his camera, but he has it with him at work, so here are the pictures I took on my iphone (yes, Ross bought me an iphone! I love it :)). 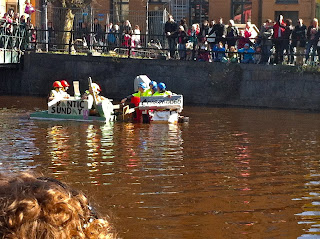 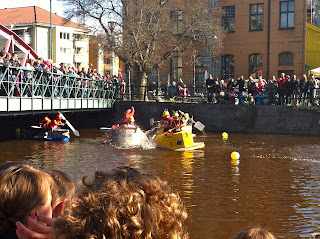 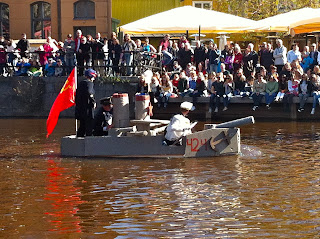 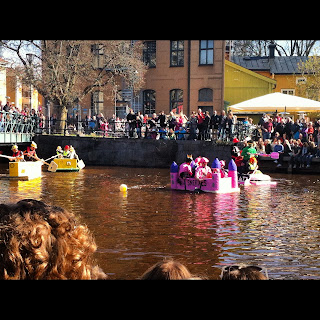 And here is someone else's video on youtube showing some boats going off the falls.

After watching about 120 of the boats (I don't know how many there were) we walked around town a bit and got Thai buffet for lunch (cheap(ish) and yummy!). Then we retired to the castle hill where Ross fell asleep and the rest of us played Hearts.

For a long time before Valborg (I don't know how long) there was a countdown clock on the front of the library counting down to 3:00 today, when past and present students don their caps and run down the hill. A large crowd gathered to watch what I thought would be a terrifying show of the mass sprinting downhill. I thought this was the meaning of the "champagne run."

I was a bit disappointed. I'm not going to post the video, because I sound a bit bitter, but the dialogue goes, "Ok, really? There is no running." Turns out the Champagnegalopp is celebrated more in the nations, and not on the castle hill. And it doesn't seem to involve running, mostly just spraying champagne everywhere. The parties in the nations were quite intense - as I said, you could feel the bass from anywhere in the city. I didn't take video, but this video here (go to 45 seconds in) on youtube does a good job capturing it.

After that we were ready to head home, but we couldn't leave downtown before stopping by Ekonomikumparken, which is where everyone goes to hang out all day. Apparently there were about 30,000 people in this park. There is a cool time lapse video of the park. It's long - I would watch people arrive starting at 3:30 and watch the crowd grow! Then, skip to 8:00 and just look at the trash! And what's even more amazing is watching people clean it up! Apparently there was an article about how handing out yellow trash bags made the job easier this year, but I'm quite impressed both with the amount of trash and how quickly they cleaned it up!

That evening we had a cookout at Bloden. We taught the Swedes how to make s'mores :) 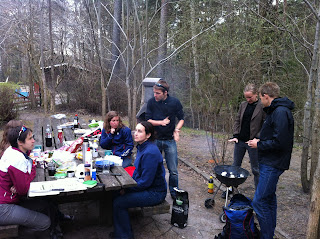 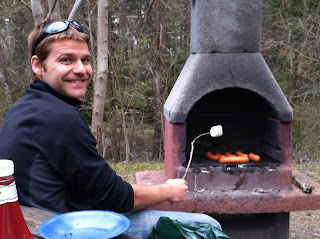