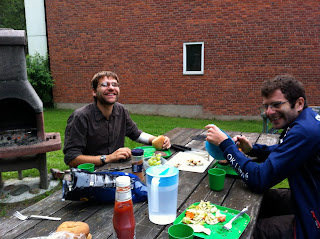 Uppsala is certainly home now. It's not my only home - I still refer to the house I grew up in as home, and my two apartments in Newton still remind me of home. But Uppsala is certainly home now. There has been one dreary day since returning, but otherwise it's been perfect Swedish summer weather. Plus, on the rainy day I had the opportunity to wear all my rain gear to bike frantically into work. Instead of getting wet from the rain I started sweating from the layers. I must learn to manage that a bit better. I started work on Wednesday, bright and early after getting home the previous night around 11pm. I'll be teaching P.E. and doing some special education work at Internationella Engelska Skolan Uppsala. It's a 60% job, so I should still have plenty of time for training. Plus, I've already told them that I must take a week off in October for North American Champs :) 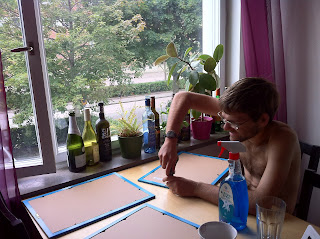 We grilled one beautiful night, and followed the yumminess with a game of Power Grid, where Ross was the supreme victor. This morning Ross started washing the outside of the kitchen window, which I've been wanting to do for months. I couldn't stay away from the fun, so I joined in "to help." I think he would have rather done it himself. Then we framed some IKEA pictures, and even assembling the frames was a challenging task. Now, I'm relaxing after running hill intervals on backbanan and chatting with Hanna. Game night and pizza later with Uppsala friends.

It's good to be home!

Game night and pizza... I wanna come over!!

Lisa, I'm excited to see you soon!
Steph, yes, game night and pizze does sound familiar. We were just missing a few bottles of wine and it would have been perfect :)