There was a period this winter when I stopped writing on the blog because I couldn't think of anything else to say. Sure, I could have told you about how we were using fabric softener for about 5 months thinking it was laundry detergent, but somehow that wasn't enough to write a whole blog post about.

And then, things started to pick up. In April we spent every weekend orienteering. I was in Göteborg for a long weekend at the Swedish team sprint camp, and then Stigtomta, followed by Silva League races in Stockholm and Cristina and Melissa visiting during Valborg. May was even busier, as I headed up to train for EOC and then spend a week racing. My parents were here during the EOC week and then they came back to Uppsala, where they were joined by my aunt and uncle.

They were here during the most glorious week so far this spring/summer. Sunshine, 20°C, cool breeze, just perfect. We spent two days in Stockholm, and it was a nice change from the last time I was there when my toes went numb in my shoes. My two favorite things that we did there were: 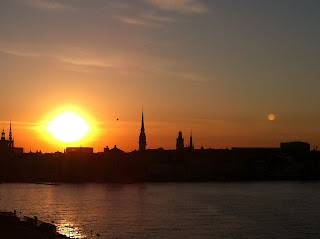 1. Morning run around the perimeter of Djurgarden. Mom, Dad and I all started out together from our hostel on Gamla Stan (Best Hostel - Gamla Stan Skeppsbron, it was quite nice, clean and quiet). Mom cut across the island and Dad and I kept going. It was quiet and beautiful.

2. Dinner at Hermans. It's a vegetarian buffet restaurant that our friend Andrew told us about (thank you, Andrew!) and it was absolutely fantastic. It was a beautiful evening and we sat outside until sunset at 9:30 just admiring the view.


The next week, when my friends Ellen, Steph and Ann visited, I made sure to take them to Hermans as well! It was unfortunately a complete weather change from the week before, and they had a rather chilly stay in Sweden. Also, the trains caught fire both to and from Stockholm, adding unnecessary time and stress to our trip. I swear they never break that frequently (or maybe they do?). It was really great having them here, although I wish some things went a bit smoother. It's so nice just to relax with friends from home (and drink 4 bottles of wine while playing Taboo).

Then it was June! Jukola was just as fun as everyone said it would be. I ran the third leg for Linné's third team for Venla. Elin and Lisa R. both ran well and Lisa handed off to me in 12th place! I ran really hard and only made 2 small errors, but I had a hard time keeping up with the girls around me. We finished in a very respectful 30th place and we were the best 3rd team. Linné 1 was 7th and Linné 2 was 21st. A pretty good day for us girls, I think.

That evening 7 of us Linné girls had another adventure and we rocked the men's Jukola race. Jukola, for those of you who don't know, is a 7 person relay that starts at 10pm and runs until about 8am the next morning. I ran the fourth leg, which is the dawn/day leg. I was worried about having to get up at 2am for my 3:45am race start. I went to bed around 10pm and could hear the start of the men's relay. I never fell into a deep sleep, which was good because it made getting up at 2am that much easier. I didn't feel that sleepy, which was surprising because I was crashing earlier in the day after my Venla race (I ran that race harder than I've run anything in a long time). I almost missed the hand off from Sofie as my magnifier wouldn't tighten on my compass, but I made it with about a minute to spare. I had a good race. Not as clean or as fast as the previous day, but still pretty steady. I really, really enjoyed it. We ended up coming in 301st and we were the first all woman's team. Fantastic.

Ok, that's as far as I'm getting for now. I'm currently in Switzerland staying at Sandra and Marc's place until just before WOC. They are great hosts and I love being here.

It should be mentioned, though, that Ross tried to jump a fence last Thursday and caught his foot. He landed badly and broke his elbow. He was hopefully going to hear more today if he has to get surgery to put everything back in place, or just a cast. So, I'll keep you updated! He's strong, he will heal fast.

I sent this to you via gchat when I got back but your thing logged off right after so I don't know if you saw it... thank you thank you thank you for being such a fabulous hostess and organizing our trip and feeding us and dealing with train fires (I mean, okay, how much of a story is "...and then everything went smoothly. The end."?) and washing our linens and everything else you did!! We had such a great time. Kabob pizza, buckets of wine and Taboo is officially never a bad idea. I can't wait to see you guys in October! xoxo

Sam is a great hostess. Djurgarden and Hermans were the highlight of our Stockholm stay.
Early morning runs in Uppsala were beautiful.