Last weekend Ross and I raced at the Swedish Ultra Long Championships. We stayed at a ski resort the night before and had a view of a beautiful sunset. In the morning we drove to the event site and jogged around a bit to stay warm. We were both really excited going into it and had a lot of fun running. Ross ran a good race, making only about 5 minutes of mistakes during his 2hr54min in the woods. I also had a good race, despite missing the first control and losing the lead pack immediately. Luckily my fears of coming in last were not realized and I finished 15th out of 34.

It was a beautiful day - the temperatures near 70 and the sun shining brightly. It was a fantastic way to spend a Saturday. We drove home Saturday evening and spend Sunday hanging about. It was our one year engagement anniversary... with no wedding plans yet on the horizon. We celebrated with an elegant meal of kebab and kebab pizza while watching West Wing. Yum :)


It continues to be a beautiful fall here. I went on a bike ride along the river last week (before my bike broke... again) and took some pictures along the way. My favorite part was the boardwalk. You could walk about 1km along the boardwalk through the swampy bay. Unfortunately, I didn't trust myself to stay upright if I tried to ride my bike along it. I also biked by Uppsala's very own downhill ski slopes... It looks more like it should be a skateboarding hill, but they're trying :)
Tuesday was official Kanelbullar Day here in Sweden. In honor of this most important holiday I baked lots and lots of kanelbullar. My plan was to pass them around at training that evening, but I got shy and so we came home with lots of extras. Many are now in the freezer waiting for me to get my next craving. 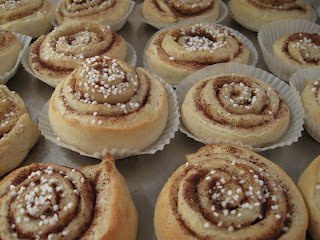 This weekend we are competing in a 25 person relay in Stockholm. Linné is fielding 4 teams, which is impressive. I'm running anchor leg on team 2 and Ross is running 5th leg on team 3. This relay is different than your tradition relay. Normally, orienteering relays work just like running relays. A person goes out, runs their course, comes in and hands off to the next person, who heads out. But if we had 25 people starting one after another we would be there well into the night. Therefore, the first two legs are traditional- one person starts, runs their course, and then hands off to another person. This person runs their course, but then they come in and tag off to 4 people. These 4 people all start at once and run their courses (different from one another). The next 4 legs all have 4 people running them at more or less the same time. The first person that comes in from leg 3 hands off to one person in leg 4. The next person from leg 3 hands off to the next person in leg 4 and so on. It it sort of like your team now has 4 teams out running for it at the same time. This happens for 5 legs and goes through 20 more runners. When all of those runners have come in the 23rd person starts on their own, and we're back to single legs. They tag off to 24, 24 tags off to 25 and then 25 finishes - and you're done!
I'm not sure I explained that in a helpful manner for those of you who didn't know what 25manna was, but hopefully you get the general idea. To top all the confusion off, there are guidelines for who can run what leg, so that the whole club gets involved. Some legs can only be run by a woman. Another can only be run by women who are not 19-39yrs old and men who are not 15-54yrs old. It's all very complicated and I'm glad I was just told to run where they think I will be the most helpful. Linné's first team came in second last year, so I'm looking forward to cheering them into first place this year :) We've already established that no one in Sweden cheers louder than Ross, so I have hope that our cheering presence will make a difference. Results can probably be found here.